The Smith Breaks Ground in the South End

Leggat McCall Properties, along with their joint venture partner Bentall Kennedy on behalf of its U.S. Core Fund, and development advisor Bozzuto Development Company, were joined by local elected officials for a groundbreaking ceremony for the mixed-use Harrison Albany Project in the South End.

The Smith – named for the artisan history in the area South of Washington Street – will bring approximately 650 units, including an onsite affordable component, distributed over three buildings. In addition, there will be an estimated 76,800 sf of new and renovated office space, and roughly 19,700 sf of retail and cultural space on the ground floors of the buildings. The surface parking will be replaced with about 650 underground parking spaces. Of the 3.1-acre site, 36% will be open space, with publicly accessible open space representing over 20% of the Project Site.

“The Smith will continue the transformation of the Harrison Albany Block into a vibrant, residential and mixed-use neighborhood, a result of the Boston Planning & Development Agency’s Harrison Albany Strategic Plan,” said Brian Golden, Director of the Boston Planning & Development Agency. “Along with market-rate and affordable residential units, this project will create hundreds of jobs, and bring cultural space and transportation infrastructure improvements to the South End.”

“The Smith creates much-needed new affordable and market rate housing, along with substantial public open space, and street level retail that improves the pedestrian experience.” said William Gause, Executive Vice President of Leggat McCall Properties. “We are proud to have worked so closely with the community in order to build a project that supports the neighborhood’s growth, while also maintaining the integrity of this unique part of Boston.”

“We have been investing in Boston since the 1980s and in the South End since 2007, with the development of 801 Massachusetts Avenue”, said David Antonelli, Executive Vice President of Bentall Kennedy. “In 2014, we acquired this site as part of a portfolio from Boston Medical Center. The Smith is in a clear path of growth leading from Boston’s financial district, and the recent announcements of planned developments in the neighborhood validate our early confidence in this location. With the support of our investors, many of which are Building Trades pension funds, as well as the City of Boston and Mayor Walsh, we are excited to contribute to the ongoing transformation of this vibrant neighborhood.”

“From the streetscape to the façade, The Smith enhances the boutique, curated character and industrial heritage of the South End neighborhood,” said Alfred Wojciechowski, Senior Principal at CBT. “By interlinking pre-existing pedestrian corridors and new curated landscaping, as well as adhering to the neighborhood’s scale and historic quality, The Smith serves as an elegant entryway to the South End and invites community activity by providing a welcoming destination. We’re truly honored to be a part of a project that promises to bring new life to this iconic neighborhood.”

As part of the retail offerings, cultural space will be created for a variety of potential neighborhood uses. The project team views this as an opportunity to embrace the project’s location between the vibrant artist community, historic industrial uses, new small businesses, and the strong residential neighborhood of the South End.

The site was purchased from the Boston Medical Center in 2014. The design by Boston-based firm CBT intends to complement the existing buildings in the neighborhood, and will be targeting the Silver level under the Leadership in Energy and Environmental Design (LEED). 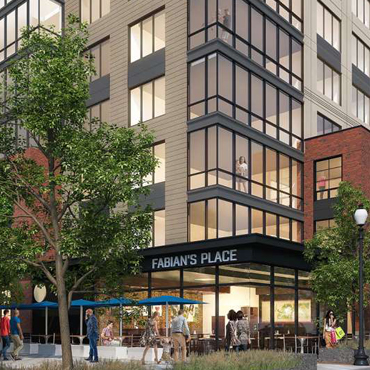